At the first of seven heavily advertised “community meetings”, Manatee County chairwoman Vanessa Baugh drew a total of three (3) people to a meeting she hosted on the evening of October 4th. It’s not clear if voter apathy, that night’s airing of “Dancing with the Stars”, or other factors were responsible for the low turnout. 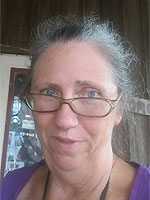 The below picture of the meeting was taken by long-time Manatee County activist Linda Neely (pictured right). Neely’s group “No Sales Tax Hikes Manatee” opposes both the sales tax measures that are on next month’s ballot. The group has mounted a budget e-mail and Facebook campaign against the sales tax measures. On Wednesday, the day mail-in ballots arrived in voters mailboxes, the group sent out this e-mail urging people to vote no.

Neely told the Guardian that at the meeting,  Baugh introduced 17 county employees. In addition, Baugh’s husband and other family members of employees were also there. “Subtract out employees and politicians and their families, and the two people I brought spread our message and you are left with 3 actual citizens who chose to come come to the meeting”, said Neely. “I don’t know if that is good sign or a bad sign”.

The county commission consisting of six Republicans and one Democrat voted unanimously in June to place a 0.5% sales tax hike to pay for infrastructure on the November ballot. The Manatee County school board has a separate 0.5% sales tax renewal on the same ballot.

“They call it “informing the public”, but really they use public funds to advocate for these taxes”, claims Neely. “In all the county’s information, which is paid for with tax dollars, they only give one side of the policy debate. By definition, that’s advocacy”, says Neely. “We just want the voters to know the facts and the history.”

The main newspaper in Manatee County, the Bradenton Herald, endorsed Baugh in August for re-election. The Herald previously reported on a different public meeting on a different topic hosted by Baugh at the exact same location in lakewood Ranch. That meeting in March reportedly drew 50 attendees. It is not clear why The Herald chose to not report on this week’s highly touted meeting, but readers can draw their own conclusions and enjoy our coverage instead 🙂

The competing Sarasota Herald-Tribune did report on Tuesday’s  meeting, but claimed that “a dozen constituents” attended. Baugh said that the county faces about $1 billion in road repair needs. “We can’t take impact fees and repair these roads”, said Baugh.  Impact fees are imposed only on new construction.

No Sales Tax Hikes Manatee has argued that those impact fees are too low, and that citizens are being asked to subsidize developers who have donated to commissioners’ campaigns. “60% of donations to the private sector ‘Yes’ campaign are for $10,000 or more. All these big donations, and most of the remaining ones, all came from developers and their associates”, said Neely. “Our elected officials are in the pockets of developers.”

Baugh took no questions at the meeting, asking those present to e-mail them so that county staff could respond.

In a July opinion piece in The Herald, School superintendent Diana Greene admitted in July that “the Manatee County School District totally botched the taxpayer-funded budget by millions.” Greene says better financial controls are now in place, and seeks to persuade voters to renew the tax. The tax was originally passed in 2002.

Neely’s group is not alone in their opposition. “We don’t believe, frankly, that the case has been made for either tax”, said Doug Egger, Tea Party Manatee President in August.

Specifically, about the school sales tax, Egger said he’s seen no evidence one way or another that the half-cent sales tax collected by the Manatee County School District since 2002 has made a positive impact inside the classroom.

More meetings are scheduled through October 20th, each hosted by a different county commissioner.

The efforts on both sides will no doubt continue through election day. As always, the Guardian reports and the readers decide.