A review of the mass e-mails sent out by the political campaign of Pinellas County commissioner Janet Long found that she committed six Florida campaign finance law violations during the county pandemic declared state of emergency. The violations consist of not including the “paid political advertisement” disclaimer required by law, to wit Florida Statute 106.143(1)(a).

After sending four e-mails with the required “paid political advertisement” disclaimer in them in the five months before the pandemic, Long dropped that disclaimer in her March 13th e-mail. That e-mail announced that the county commission had declared a Local State of Emergency that same day.

Long  sent out four more campaign e-mails without disclaimers during March, all dealing with the emergency created by the coronavirus. After her sixth such e-mail on April 3rd, we wrote an article pointing out the campaign law violations they constitute.

Since our article, Long has sent out two more campaign e-mails, and now with the required disclaimer, but in tiny text at the bottom. Shown immediately below is the bottom of her e-mail sent just yesterday on April 22nd 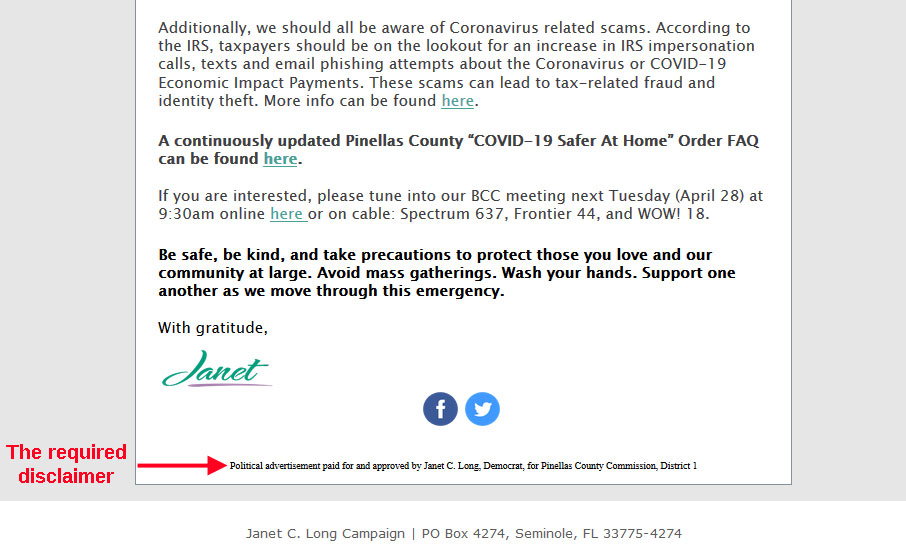 Long’s latest e-mails may still be a campaign law violation. FS 106.143(1)(a) doesn’t just require that the disclaimer be displayed, but that it be “prominently” displayed. We’ll let the reader decide the prominence of the above disclaimer.

Long did not respond to our questions and repeated requests for comment about her actual and potential campaign law violations. Her April 22nd e-mail was sent on Earth Day, a day Long celebrated last year

The first Earth Day was celebrated on the 100-year anniversary of the birth of the founder of the Soviet Union Vladimir Lenin, a murderous communist. Coincidence? We think not. That’s why me don’t celebrate Murderous Communism Day on April 22nd here at The Guardian.

As always….the Guardian reports and our readers decide. Like our Facebook page to find out when we publish articles.