TampaBayGuardian.Com has found a typo in a ballot question involving a sales tax renewal to fund schools in Manatee County. Three public agencies were involved in placing this measure on the ballot, and we asked all three “how did this error arise?” None of the agencies responded to our question.

The actual ballots say “captial expenditures” [sic] instead of “capital expenditures”. 73,150 mail-in ballots have already been sent out to voters, and it’s too late to print new ballots for the remaining voters.

The error is not a trivial matter because it means that a question different than the one officially approved has been placed on the ballot. Florida case law is scant on the subject, but earlier this year the town of Erie, PA argued that a typo on one their ballots didn’t “affect the validity or legality of the ballot question.”

The typo isn’t the only mistake we found. On the school board’s own website, under the headline “Board Approved Referendum Ballot Language”, the school board posted erroneous ballot language that made a claim of “citizen oversight”. This was the original draft language, but not the ballot question that was ultimately approved (see page 3) by the school board at its June 14th meeting.

Barber claimed that “the intent and purpose is that oversight will be conducted by a committee comprised of local citizens”. However, the actual ballot language says that school board will be “charging its Audit Committee with the oversight of the surtax”, not the “citizens’ oversight committee” (a separate entity) that Barber was referring to. The ballot language is legally controlling, not any “intent and purpose” that the school board may have.

We had sent specific questions to school superintendent Diana Greene, and Barber responded without answering those questions. We wrote Barber and said that our questions had not been answered, but received no further response. 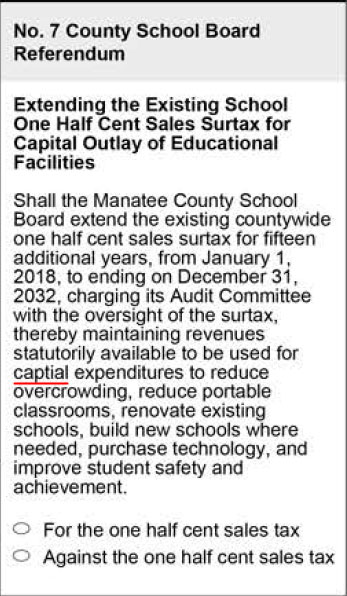 Separately, we asked all three agencies as simple question: how did this typographical error arise? None of the agencies answered our question.

The typo and other stumbles could open the door to a legal challenge to have the measure thrown out, even if it is approved by voters. If thrown out, the school board would have to seek renewal of the sales tax some time next year instead, before the current tax expires on December 31, 2017.

Broward County is also dealing with an embarrassing ballot question mix-up in which “yes” and “no” are mixed in the answer portion of the 3-language sales tax ballot question. Despite proof-reading by multiple  elections office employees, the error made its way on to the ballot. In that case, Supervisor of Elections Brenda Snipes said she “hopes most voters won’t be confused”, proving that hope does indeed spring eternal 🙂

The typo and other missteps come as the Manatee County school board’s efforts to have this tax renewed is facing grassroots opposition from an increasingly skeptic electorate. Manatee County resident Linda Neely has sent out a series of e-mails (example here) urging people to vote no on both sales tax measures on the ballot.

“The typo may confuse many voters. They may see it as a “big word” that they don’t understand, and that may leave them feeling ignorant”, said Neely. “They may even decide to not vote on the issue because they don’t understand the word, or vote differently than they otherwise would have. ”

Neely also said that “citizens have a right to expect that the exact ballot question that was approved is the one that appears on the ballot, and that is not the case here.

“Therefore, the ballot measure should be thrown out”, Neely said. “If not by the Supervisor of Elections, then it should be withdrawn by the school board, or by the county commission, both of whom approved the exact ballot language which has now been altered. If they won’t throw it out, then it should be voided by a court of law.”

Presumably, the intent of the county commissioners was to “fund” roadways, not make them more “fun”, nor to suggest that “fun” is a verb.

The issue involved in the excerpt was an important one, namely the infrastructure sales tax that the county commission decide to place on the ballot. That tax is the other sales tax measure on Manatee county voters’ ballot this election. Or the  “other sales tax hike”, as opponents prefer to call it.

Could the typo affect voter decisions? What about the erroneous assertion that there will be “citizen oversight”? Should the school board, the county and/or Supervisor of Elections Michael Bennett have responded to our question about how the typo arose? As always, the Guardian reports and the readers decide. Please like our Facebook page to find out when we publish new stories.